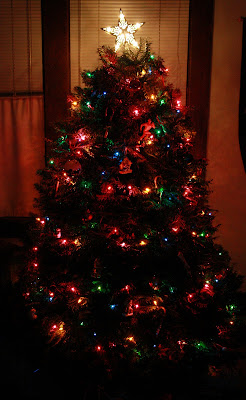 I had fully intended to have at least two more wonderfully sweet recipes to share with you by today, but... alas, cleaning our apartment, last minute gift wrapping, working, and life in general got in the way, and those delicious sweets got pushed to the back burner, so to speak. But that's okay! This time of year is not about the material things, no matter how delicious.
I'll be back as soon as I can with more tasty recipes to share, but in the meantime, I hope your holiday is filled with warmth and happiness, with family and friends close by.
Merry Christmas!
Posted by Jessica Johns at 9:00 AM No comments:

Email ThisBlogThis!Share to TwitterShare to FacebookShare to Pinterest
Labels: personal 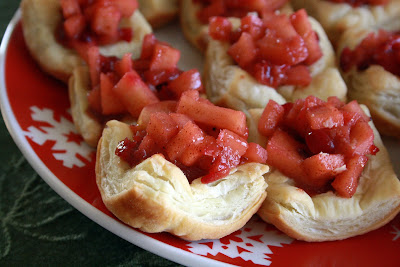 Ooooh boy... have I got a recipe for you.
Dane and I hosted a housewarming / Christmas party this weekend, and these little tarts were my shining dessert. All of our closest friends came to celebrate with us... they came, they ate, they drank, and they did a marvelous job of making our house warm! We're hoping this is just the first of many rockin' parties to come. 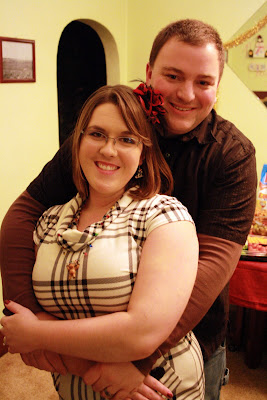 As our guests quickly discovered, these tarts are addictive. They vanished in about 5 minutes once everyone arrived, although I'm amazed any of them lasted until the party after Dane got home from work at 4:30 and tried one... I had to practically hide them to keep him from eating them all! 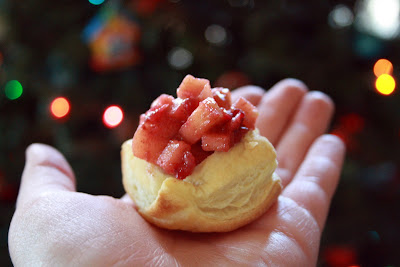 And don't let the color throw you off. At first, everyone kept asking, "What are the little tomato things?" and I kept having to explain that "No, those aren't tomatoes... they're actually apples!" You can blame the cranberries for the festive red color. And you can blame the butter and cinnamon for the epic-level flavor. 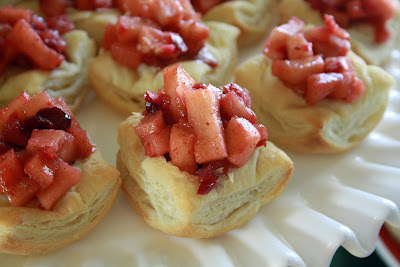 Seriously, if you like apple pie, you're going to love these. The bubbly, melted butter joins forces with sugar, cinnamon, and nutmeg to form a sort of spicy caramel sauce that coats the sweet, tender apples... and piling the filling on top of light, flaky, buttery puff pastry sends the flavors out of this world. (And I have it on good authority that leftover filling goes exceptionally well with french toast the next morning.) Pop one of these guys in your mouth and you'll understand the meaning of irresistible... betcha can't eat just one!
Read more »
Posted by Jessica Johns at 10:30 AM 3 comments: 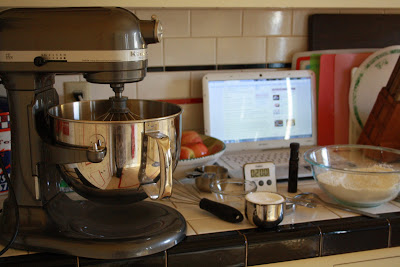 Wow guys... I am so sorry I've been gone for so long! But I promise I have a good excuse... Dane and I just moved from our teeny little apartment into our big awesome house, so needless to say we've been a little busy! Between packing, moving, getting sick on the first day we were here, unpacking, taking finals, and working, I just haven't had the time or the energy to spend here. Still, I knew I'd be out for a little while with the move, but I never expected to be out for two whole weeks! But don't worry guys... I promise the silence is over. 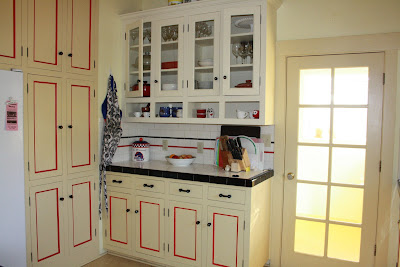 It's been a hectic couple of weeks, but it's so nice to have a huge, amazingly cute kitchen to work in now! I'm more excited than ever to cook and bake now that I have such an inspiring space to do it in. Isn't it great?

But enough blabbering about the house... onto the food! 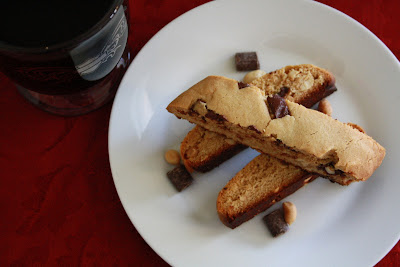 Immediately after we moved, we were without internet for about a week. And while it was kind of nice not having the distraction of facebook and youtube while we began unpacking, it was a little on the frustrating side because both of us had online finals to take during that week. Fate is always convenient, right? So, since my advanced patient monitoring final simply couldn't wait a week for a technician to make out to our new house, I spent one entire afternoon holed up in the coffee shop down the road working on it. And as I sat there contemplating the use of transcutaneous CO2 monitoring and munching on a tasty peanut butter biscotti, it hit me... I should make these at home! 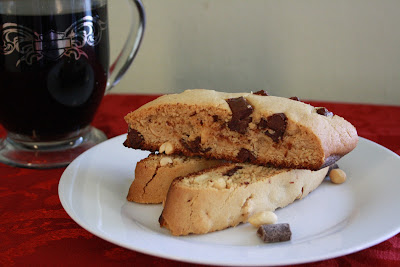 And I had the perfect excuse to make some... my best friend Sydney and her new husband(!) Corey are both graduating from college this Friday, and I made them a little gift basket with some cute coffee mugs, a bag of coffee, and some cool hot chocolate that turns orange when you heat it up, and these biscotti seemed like just the thing to finish it off! The nice thing about making biscotti at home is that you can make them as hard or as soft as you want by simply varying the baking time during the second step... I, for one, am not a huge fan of having biscotti that threaten to break your teeth, so I went for middle ground with these. And even though I burned the bottoms just a little thanks to my new oven - which I'm quite certain is baking at a higher temp that it tells me it is - they were still very tasty dunked in a nice warm cup of coffee. I hope Sydney and Corey enjoy these as much as I did! 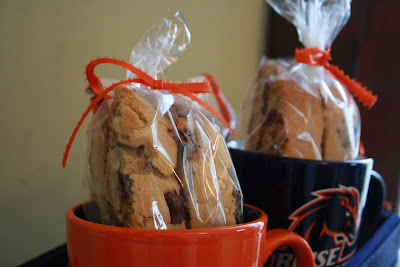