Apple pie has a special place in my heart. It was always one of my favorite desserts growing up, and it was one of the first things I made on my own after leaving home. It was the first thing I ever cooked for Dane, matter of fact. Hahaha... you should have seen the two of us in the basement of Driscoll Hall (the dorm I lived in my freshman year at BSU), peeling apples with butter knives we'd stolen from the cafeteria. It took forever to peel all the apples - especially because I was making 2 pies - and cutting them with the dull knives yielded weird, uneven chunks... but despite all of the hiccups, the pies turned out to be delicious, so much so that Dane ate almost a whole one by himself. We still joke that that was the day he knew he loved me. :)

Unsurprisingly, I make an apple pie every year around thanksgiving. My family already has pies covered for thanksgiving this year, so there's no need to take one to the annual feast, so this one is just for Dane and I. He's currently hunting but he'll be back tomorrow, and I hope he finds it a welcome surprise.

...and with all the tradition surrounding apple pie, it seemed only fitting that my first real food post should be about the beloved dessert. :)

Keeping with Mom's tradition, I like to use 2 different kinds of apples. She usually uses Rome and Granny Smith, but I've had a particular fondness for Honey Crisps this year so I thought I'd give those a try instead of Rome. 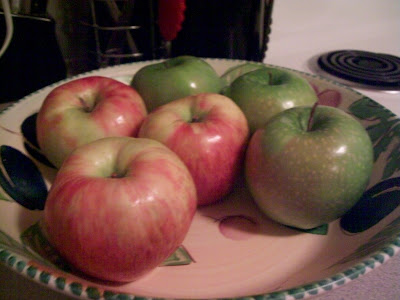 Mom also taught me to do the filling a little differently than most methods I've seen. Most recipes I've seen call for the sugar and spices to be mixed in with the apples, and then to have the whole apple-spice mixture poured into the crust... we, however, like to layer it. Keeping everything separate, make a thin layer of apples on the bottom of the crust, then place a few pads of butter on top of the apples and sprinkle with the spice mixture. Repeat. 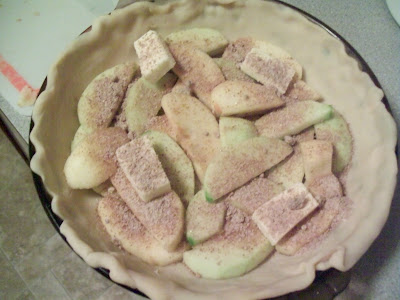 Six apples gives you a nice big mound of goodness on which to place your top crust. When it cooks, the butter will melt and combine with the sugar and apples as they reduce to form a lovely sort of gravy on the inside of the pie. I almost always have some of the sugar-spice mixture left over after making a pie... I like to save it and eat it on oatmeal. :) 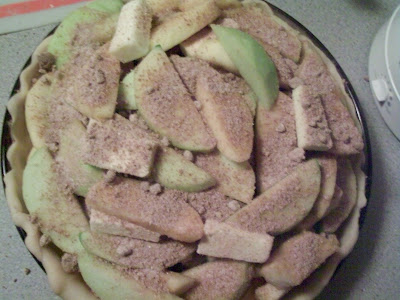 Look at how pretty it turned out! Next time I think I'll use at least one more apple... it cooked down a little more than I really wanted. I really only make about one of these a year, so I forget sometimes how much those delicious apples like to sink into the pie.

For a new challenge this year, I decided to try making my own whipped cream. Everyone's been telling me that once you have homemade whipped cream you'll never eat cool-whip again... and boy were they right! What have I been missing all my life? Maybe I was simply eating the wrong kind of cool whip... I mean, after all, the stuff I usually eat is almost always labeled "sugar-free" or "fat-free" or "light", in my feverish attempts to avoid the diabetes and heart disease that run so prevalently in my family. The whipped cream I made certainly had none of those three labels. But even as my arteries are clogging and my pancreas is shutting down as we speak I must say... I have never had whipped cream this tasty in my life.

It was light and fluffy... but rich.  For once in my life I could taste the cream and the vanilla, instead of just the air. And I usually claim that I could eat a whole tub of cool-whip by myself... so uh oh... this could be bad news, for sure. A whipped cream obsession, fueled by even better whipped cream? Maybe my mother was right... maybe I am going to gain 200 pounds from all this cooking. Probably not the best diet to be on 9 months out from my wedding... hahaha... especially with no time to work out these days! Oh well... all the people I care about know how much I love food anyway. :)

Ingredients for Pie:
2 pie crusts (feel free to make your own (this recipe is great!), but with my limited time I usually rely on good ol' Pillsbury to do the work for me these days)
6-8 apples (I like to use half Granny Smith and half something else... this time it was Honey Crisps)
1 tbsp lemon juice
1/2 cup sugar
1/2 cup packed brown sugar
1 tsp ground cinnamon
1/4 tsp ground nutmeg
2 tbsp flour
1 whole stick of butter
1 egg, beaten, for egg wash