Here in Idaho, we get our fair share of snow. Usually it's no big deal... the roads get plowed and sanded and people lace up their snowboots and throw on their water-proof coats, and life goes on as usual. It's really pretty rare for us to get enough snow that it keeps people from going out. 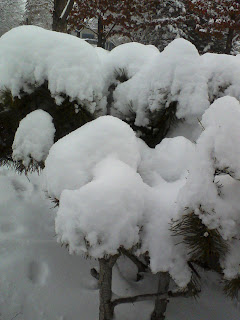 But yesterday we woke up to this. It snowed more than 5 inches between when I arrived home from work at almost 11 the night before and 6am yesterday. In total, Boise got over 7 inches of snow in 12 hours. I woke up to go to class, only to find my car buried, and the roads unplowed. By 6:30 all classes at BSU had been canceled until noon, and as the snow continued to fall without sign of relent the school finally decided to cancel all classes for the rest of the day too. So, for the first time since I was 14 years old, we had a snow day.

Normally, a snow day would have been really fun. I would have gladly run out to the grass and made a big snow man, and come inside and baked cinnamon rolls and made soup for the rest of the day. But alas, this snow day came at a really inconvenient time. You see, Dane and I have been staying in a hotel since Tuesday. The bathroom at our apartment has suffered some major water damage from some poorly-done plumbing work (which was done before we moved in), and our landlord has kicked us out until Friday so it can be repaired. Luckily, the landlord is footing the bill for our stay, but still... no grass on which to build a snowman, and no kitchen in which to cook. :(

Of course, my first thought was, "What am I going to eat today?" Continental breakfast was free, of course, but what about lunch and dinner? I didn't really want to drive, and the hotel we're staying at has no restaurant... I found myself wondering if Pizza Hut would deliver during a blizzard. But still, pizza would get old really fast, and it didn't sound all that appealing. So I decided to brave the roads after things had warmed up a little, and drove the mile down the street to Albertson's to stock up a little. 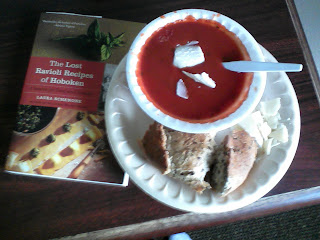 Perhaps all this cooking and food-blogging has made me a bit of a culinary snob, but I wanted real food. Even though I had no means by which to cook (other than a microwave), I was not going to settle for preservative-laden frozen dinner. And on a blustery day such as this one, what could possibly be better than soup? I had my heart set on butternut squash soup, but the only kind they had at the store was almost $5 a can, so I settled on some Progresso hearty tomato instead. I hit the bakery for some nutty artisan bread (which was, omg, the best bread I've eaten in a long time) and the deli case for some pungent asiago cheese, and went back to the hotel to curl up with my lunch and a good book (The Lost Ravioli Recipes of Hoboken is a dynamite book by the way... I'd definitely recommend it to any foodie out there). I picked up some other things too... deli chicken with salad for dinner (since I wasn't sure if the snow would clear enough by dinner time for us to get out to a restaurant), and some veggies and a couple of apples for snacking.

I spent most of the day hunkered down in the hotel room, studying for my next test, watching food network on the cable TV we don't get at home, and drinking my fair share of the hotel's free hot tea. Meanwhile, the temperatures outside continued to rise and the sand trucks continued to run, and by the time Dane got home from work the road conditions had greatly improved.

So we headed out to the Idaho Botanical Garden, to check out their annual light display. 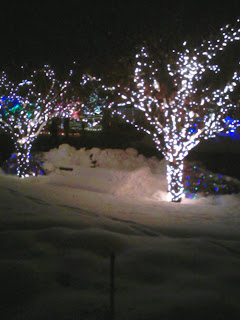 I really wish we had snagged the camera from home for this occasion (please forgive me, for all of the pictures in this post are from the camera on my phone, haha). The garden - which is gorgeous enough in the spring and summer - came to life with all of the sparkling lights. There were simulated icicles and huge light ornaments... the stone gazebos had been generously lit, and every 100 feet or so there were little wooden fires to get warm at... some of the lights had even been buried by the snowfall of the last 24 hours, and it was truly marvelous to see them glowing underneath the virgin snow. We warmed ourselves with free hot chocolate and cookies, and the pleasure of each others' company. Between the craziness of work and school, Dane and I don't see each other much these days, so the festive, quality time together was much appreciated.