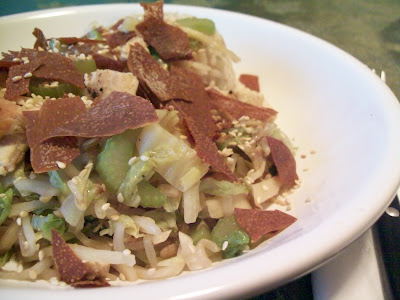 I have no intention of turning this blog into a food/calorie journal, but I must confess, I ate very well last week. I put some old habits back into practice and found that getting back to eating healthy really is mostly about finding a good routine! The trick for me seems to be deciding what I'm going to eat for the whole day (including snacks) before I even put anything in my mouth... so that way if I'm tempted to eat, say, one of those cookies sitting in the break room, I already know that my calories are spent and I have other tasty, healthier options waiting for me at their pre-scheduled time. It's not the most terribly fulfilling way to eat, but it is better for health as well as my waistline. And most importantly... it's what works for me. :)

Well, after that wonderfully empowering week of healthy eating, I opted to let loose a little on Saturday when I spent the evening with my sister. We went to one of my favorite restaurants back home - which no restaurant in my new hometown has yet to compare to - and I guiltlessly enjoyed a deep-fried egg roll with my usual fried rice and pork chow mein. It really was a satisfying treat, especially since I don't get to eat them very often. And I probably could have gotten away with one gluttonous meal for the weekend... if I hadn't promptly come home on Sunday and eaten way too many of the delicious, cream cheese-laden taquitos I made for lunch, haha. Then, in an unfortunate turn of events, I stopped at McDonald's for dinner on my way in between hospitals during my evening shift, knowing that I wouldn't have time to stop at the hospital cafeteria before having to get report. Tisk, tisk. This, my friends, is precisely the kind of situation I usually avoid with a little pre-planning. Oh well.

So, I figured that after a weekend of pure pigging out, it was time to jump back on the healthy-eating bandwagon. My food planner is all nice and filled out for the week, complete with perfectly-portioned meals and well-balanced snacks, to set myself up for success. And this meal I share with you was the perfect way to get my week of healthy eating off to a good start. 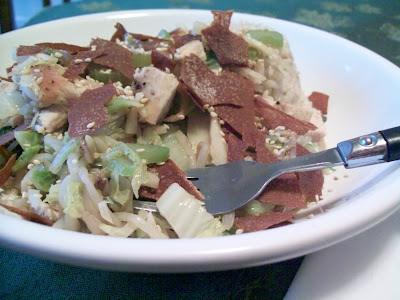 Another work of culinary genius from Ellie Krieger, this dish is as filling as it is delicious. Since most of the meal consists of low-calorie components the portion size is quite large... so large, in fact, that you'd never believe it only has 470 calories! Plus it's full of vitamin-rich veggies, high-fiber brown rice, and 30 grams of lean protein, making this meal a nutritional powerhouse. But don't be fooled... it doesn't taste like "healthy food." The flavors are full-bodied and gratifying for such simple ingredients, yet the sauce is light enough to avoid being overpowering. The addition of crunchy baked wonton skins was a particularly nice touch, reminiscent of canned fried noodles only without the guilt. Dane hasn't been overly crazy about all of the new healthier recipes I've been trying lately, but he gave this one two thumbs up... looks like this is a recipe I'll be adding to the rotation pretty frequently!

Directions
1. Preheat the oven to 375.
2. Toast sesame seeds in a small dry skillet over medium-high heat, stirring frequently, until lightly colored, about 2 minutes; set aside. In a small cup or ramekin, dissolve the cornstarch in the sherry; set aside.
3. Brush a baking sheet and the wonton skins lightly on both sides with 2 teaspoons of the canola oil. Season with the salt and bake until browned and crisp, about 8-10 minutes. Transfer to a wire rack and set aside.
4. In a large heavy skillet or wok, heat the remaining 1 tablespoon of canola oil over medium-high heat. Add the scallions, garlic, cabbage, celery, bamboo shoots, and bean sprouts and stir fry until the cabbage is soft and wilted, 4-5 minutes. Add the sugar, broth, soy sauce, and sesame oil, and cook for 3 minutes. Add the sherry-cornstarch mixture and chicken, and simmer until the chicken is heated through.
5. Serve over the cooked brown rice. Crush the wonton skins over the top and sprinkle with the toasted sesame seeds.
Posted by Jessica Johns at 9:56 PM