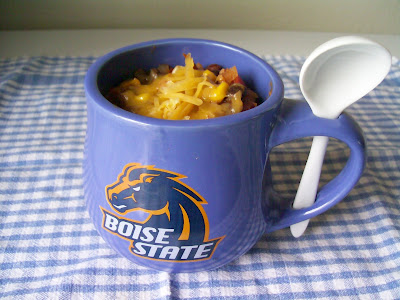 It's funny how sometimes everything in the world seems to align to the same idea at the same time. Like, for instance, me coming across these adorable BSU soup mugs. Chili had been on the menu for last weekend for over two weeks and then suddenly, two days before I was going to make it, I ran across this irresistible find on my first trip to the Bronco Shop in a very long time. It was as if the Bronco Nation gods knew that I had chili (and cute dishes) on the brain. Then, Monday (and Tuesday), after last week's lovely string of 50-degree days, it snowed out of nowhere. Funny... perfect weather for a reheated bowl of chili. Oh, and it just so happens that I'll be super busy later this week and won't have time to cook... wouldn't it be nice if I could pull something out of the freezer for a quick meal without any effort? What was that? Did someone just say that chili freezes extremely well? 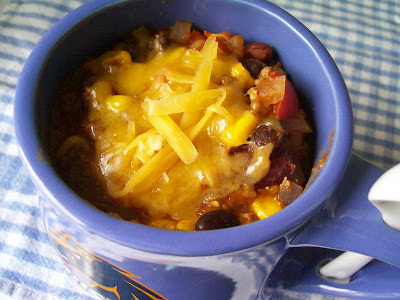 Chili is one of those weird things that, for some reason, Dane absolutely refuses to eat. Like won't even try it. Not even two bites. So it's something that's been on my list of recipes-to-try-when-the-boy-is-out-of-town for pretty much forever. I've bookmarked several prospective recipes over the last couple of years, but when I saw this recipe in (you guessed it) my Ellie Krieger cookbook I knew I had to pencil it in on the schedule. 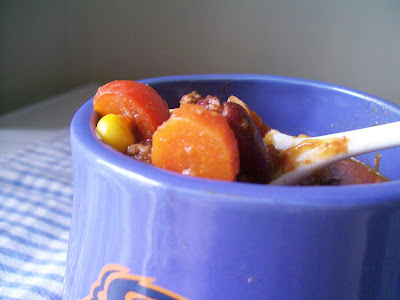 Ellie calls this recipe "confetti" chili because it's speckled with all kinds of glorious colors from all the yummy, brightly-colored,  nutrient-packed veggies she managed to slam into it. But don't worry... it doesn't even remotely resemble beef stew like I was afraid it would. This recipe is a chili-lover's chili for sure. And even if you hate chipotle like I do follow the recipe at least once, because it's actually quite good! The amount she calls for is just enough to add a little flavor without overpowering the whole dish (like many recipes containing chipotle do).
I can't wait to eat this again on Thursday and Friday! ...although I could totally do without the snow this time. :)

Confetti Chili
totally stolen from The Food You Crave
yields 4 servings, 450 calories each
Ingredients
1 tablespoon olive oil
1 small onion, diced
1 medium red bell pepper, seeded and diced
2 medium carrots, diced (ok so the recipe only called for one, but one is never enough for me)
2 teaspoons ground cumin
1 teaspoon ground coriander
1 lean (90% or higher) ground beef
One 28-ounce can no-salt-added crushed tomatoes, with their juices
2 cups water
1 canned chipotle chile in adobo sauce, seeded and minced, plus 2 teaspoons of the sauce
1/2 teaspoon dried oregano
One 15.5 ounce can black beans (preferably low-sodium), drained and rinsed
One 15.5 ounce can kidney beans (preferably low-sodium), drained and rinsed
1 1/2 cups frozen corn kernels
salt and pepper to taste
Directions
1. Heat the oil in a large pot or Dutch oven over medium heat. Add the onion, bell pepper, and carrot, cover and cook, stirring occasionally, until softened (about 10 minutes). Add the cumin and coriander and cook, stirring, for 1 minute. Add the ground beef; raise the heat to high and cook, breaking up the meat with a spoon, until the meat is no longer pink. Stir in the tomatoes, water, chipotle and adobo sauce, and oregano, and bring to a boil. Reduce the heat to medium-low and cook, partially covered, stirring occasionally, for 30 minutes.
2. Stir in the beans and continue to simmer, partially covered, for another 20 minutes or so, until the chili is nicely thickened. Stir in the corn and cook until heated through. Season with salt and pepper and serve.
Posted by Jessica Johns at 12:37 PM