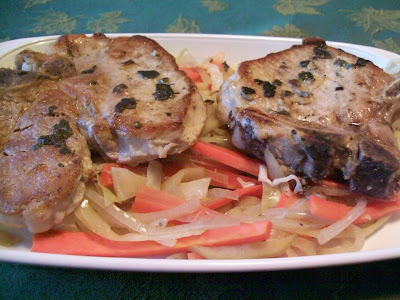 I'm a little ashamed to admit that I know very little about St. Patrick aside from the fact that he's the patron saint of Ireland. Can I use the fact that I'm not Irish as a decent excuse? After doing a little research (and I do mean a little), I discovered a legend about a man who banished snakes from Ireland, and a more believable story about a priest who used a shamrock to describe the holy trinity. Apparently March 17 is the widely accepted date of St. Patrick's death, and its celebration began as a day of feast to remember his his influence. So the whole corned beef and cabbage obsession makes sense... and while I'm sure St. Patrick wasn't a drinker himself, it's well-known that the Irish can't have a celebration without a healthy gratuitous amount of beer. :)

Another interesting tidbit I discovered is that corned beef is actually not a traditional Irish dish. Corned beef's popularity actually originated during the Irish immigration to America, and it's now served in Ireland more as tourist-friendly fare. The original Irish dish most-likely consisted of bacon or ham and cabbage, rather than beef. So, since I'm not a huge fan of super-salty corned beef, I decided I'd try this recipe for Pork Chops and Cabbage and Apple Slaw in honor of St. Patrick instead. 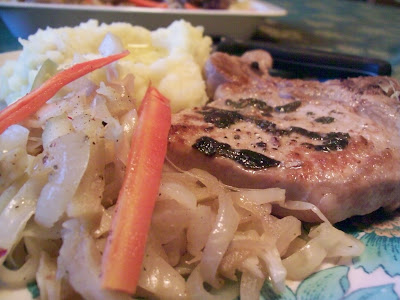 Up to this point, I had never actually tried the pork and apple combination. It seemed like such a popular pairing, though, that I knew I had to try it... and now that I have tried it I must say, I very much approve! The sour-sweetness of the Granny Smith apple was a surprisingly lovely complement to the juicy, savory pork chop. I think next time, though, for ease of preparation, I'll just buy a bag of pre-shredded cabbage and carrots, as shredding the carrots by hand proved to be both time consuming and a major pain. But it was worth it! So here's to you, St. Patrick... thanks for bringing Christianity to Ireland, and for giving us another excuse to celebrate. :)

Sage-Rubbed Pork Chops with Warm Apple Slaw
from The Food You Crave
makes 4 servings, 330 calories each

Directions
1. For the pork chops, combine the sage, garlic, salt, and a few grinds of pepper in a small bowl. Rub this mixture all over the pork chops and let them sit at room temperature for 10 minutes.
2. Heat the oil in  large non-stick skillet over medium-high heat until good and hot. Add the chops and brown well on both sides, 2-3 minutes per side. Transfer chops to a plate.
3. To make the slaw, carefully wipe out the pan and heat the oil over medium heat (I actually used my wok for this step because my "large" skillet was not nearly large enough for all the cabbage to fit). Add the onion, apple, and sage and cook, stirring a few times, until softened and golden brown (4-5 minutes). Add the cabbage, carrots, vinegar, and salt and continue cooking until the cabbage and carrots begin to soften (about 5 minutes).
4. Add the broth and return pork chops to the pan, burying them in the vegetable mixture. Cover and cook just until the pork chops are done (about 7-8 minutes).
5. Serve pork over the slaw with a little of the pan juices.
Posted by Jessica Johns at 8:30 AM