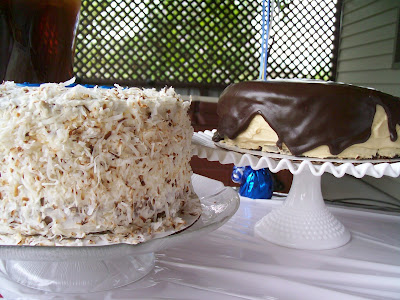 A month or so ago when my family was talking about the BBQ we would have in celebration of Megan and I graduating this spring, I had a crazy idea... I wanted to make the cake for the event. Since our graduations were so close together, Megan and I agreed that we'd just have one BBQ for the both of us, instead of one for each. But graduation is no small event for either of us. Megan was born with a chromosomal abnormality and, when she was a baby, no one was even sure how long she'd live... her graduation from high school is a momentous feat. And of course, I've worked hard to get myself through college. So I decided that even if we couldn't each have our own special party, we at least each deserved our own special cake. 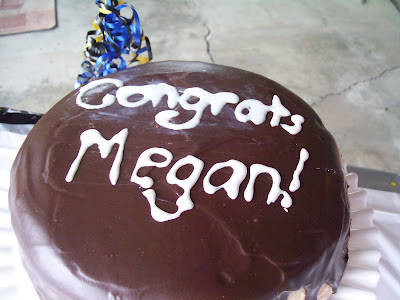 So, always eager to buy a new cookbook, I bought Sky High Cakes for inspiration. Together, Megan and I decided what cakes we would have for our BBQ... and I was not a bit surprised when Megan chose one covered in chocolate and peanut butter. This kid would eat a whole jar of peanut butter with a spoon if we let her.

And oh boy... did she pick a delicious cake. 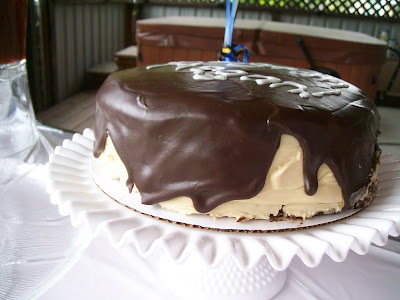 Once we cut into the cakes there was no time to get photos of the individual slices... they went too fast! This cake was by far the favorite too, and there wasn't crumb left of it by the end of the night. This cake was downright sinful. The layers of cake were fudgy, and the creamy peanut butter frosting melted in your mouth like butter in the oven. And, even though I didn't think it was possible, the chocolate-peanut butter glaze took the sinful flavor of this to a whole 'nother level. It was rich and creamy, and chocolatey, and peanut buttery... and amazing.
After they finished with a piece of this cake I had people trying to hire to make their birthday cakes for them! My grandmother thinks I ought to turn cake-baking into a side business... and someone even suggested that I should make my own wedding cake, haha! And to be honest, I don't need the encouragement, because I'd already thought of that myself. But that would be crazy, right? Who needs the stress of putting a cake together the day before her wedding? Right? :) 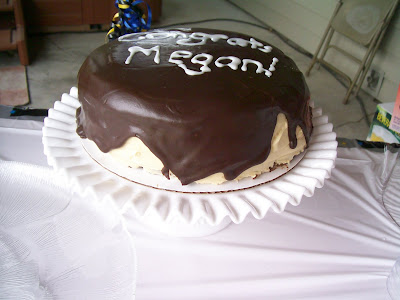 And seriously, don't be intimidated by this cake. It was really quite easy (especially compared to the other one I made). My one suggestion, though, is to add the chocolate-peanut butter glaze a little at a time, rather than all at once like I did. The recipe in the book just says, "Simply pour the glaze over the top of the cake, and spread it evenly over the top" which I took to mean, "Pour all of the glaze on at once and spread it out," and it wound up blanketing the entire cake in chocolate rather than resulting in the pretty long drips like it should have. Don't worry, it still tastes amazing completely covered in chocolate, but if you want pretty drips you should do it a little at a time. Also, if you decide to use Wilton Cookie Icing to ice on a message (like, "Congrats Megan!") don't microwave it like it says on the directions. It made the icing way too thin, and even after several hours of trying to get the icing to harden back up it still ran all over the place when I tried to pipe it on. But you live and you learn, right?
Peanut Butter Chocolate Cake
from Sky High Cakes
Ingredients
For the Cake
2 cups all-purpose flour
21/2 cups sugar
3/4 cup unsweetened coca powder, preferably Dutch process
2 teaspoons baking soda
1 teaspoon salt
1 cup neutral vegetable oil, such as canola, soybean, or vegetable blend
1 cup sour cream
1 1/2 cups water
2 tablespoons distilled white vinegar
1 teaspoon vanilla extract
2 eggs
For Peanut Butter Frosting
10 ounces full fat cream cheese, at room temperature
*Note: using lower fat cream cheese will result in a frosting that is too soft.
1 stick (4 ounces) unsalted butter, at room temperature
5 cups confectioners' sugar, sifted
2/3 cup smooth peanut butter
*Note: do not go for natural, or the oils will separate in your frosting.
For Chocolate-Peanut Butter Glaze
8 ounces semisweet chocolate, coarsely chopped
3 tablespoons smooth peanut butter (see about note)
2 tablespoons light corn syrup
1/2 cup half-and-half
Directions
For the Cake
1. Preheat the oven to 300 degrees F. Butter and flour the bottoms and sides of 3 8 or 9-inch round cake pans. Line the bottom of each pan with a round of parchment or wax paper.
2. Sift the flour, sugar, cocoa powder, baking soda, and salt into a large bowl. Whisk to combine them well. Add the oil and sour cream and whisk to blend. Gradually beat in the water. Blend in the vinegar and vanilla. Whisk in the eggs and beat until well blended. Scrape down the sides of the bowl and be sure the batter is well mixed. Divide among the 3 prepared cake pans.
3. Bake for 40-45 minutes or until a wooden toothpick inserted in the center comes out almost clean. Let cool in the pans for about 20 minutes. Invert onto wire racks, carefully peel off the paper liners, and allow to cool completely.
For the Peanut Butter Frosting
1. In a large bowl with an electric mixer, beat the cream cheese and butter until light and fluffy. Gradually add the confectioners' sugar 1 cup at a time, mixing thoroughly after each addition and scraping down the sides of the bowl often. Continue to beat on medium speed until light and fluffy, 3 to 4 minutes.
2. Add the peanut butter and beat until thoroughly blended.
For the Chocolate-Peanut Butter Glaze
1. In the top of a double boiler or in a bowl set over simmering water, combine the chocolate, peanut butter, and corn syrup. Cook, stirring often, until the chocolate is melted and the mixture is smooth.
2. Remove from the heat and whisk in the half-and-half, mixing until smooth. Use while still warm.
Putting it Together
1. Place one layer, flat side up, on a cake stand, cardboard cake round, or large serving plate. Spread 2/3 cup of the Peanut Butter Frosting evenly over the top. Repeat with the next layer. Place the last layer on top and frost the top and sides with the remaining frosting.
2. To decorate with the Chocolate-Peanut Butter Glaze, put the cake plate on a large baking sheet to catch any drips. Simply pour the glaze, a little at a time, on top of the cake, and, using an offset spatula, spread evenly over the top, just to the edges so that it runs down the edges in long drips. Refrigerate, uncovered, for at least 30 minutes to allow the glaze and frosting to set completely. Remove 1 hour before serving.
Posted by Jessica Johns at 12:00 PM