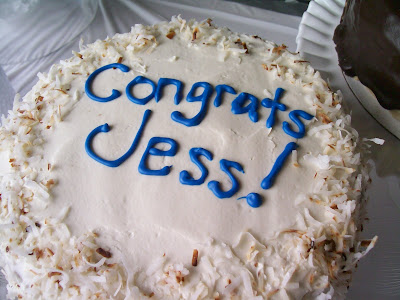 Next up on the dessert menu for our awesome graduation BBQ was this epic Pina Colada cake! I knew the peanut butter chocolate cake was going to be rich, even before I made it, so I knew we would need a lighter option for the cake table. As a self-admitted chocolate addict, it was very difficult not to pick another chocolate cake out of the book, but I realized that not everyone loves chocolate as much as I do and that we needed something completely different for our second cake.

Enter this fine piece of dessert. 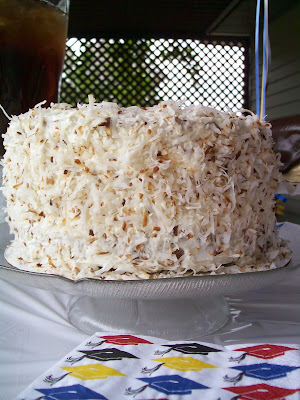 Light, brown sugar cake... pineapple-rum filling... and rich, coconut buttercream with toasty flakes of sweet coconut... what's not to love? It was the perfect airy, tropical counterpart to the other cake. It was sweet, it was boozy, and oh boy was it good. I even sent a few doggie bags home, because everyone wanted more.
I won't lie to you though... this cake was more work than I honestly expected. First, the pineapple filling took almost an hour to thicken like it was supposed to. Luckily I made it up the night before and didn't have to wait on it! Then, the frosting nearly gave me a heat attack. I decided to frost and decorate the cake the morning of the party, thinking it wouldn't take that long, but the first time I made the frosting I added the butter too soon and it separated into an oily mess and I had to make it all over again. So learn from me, and make sure you whip the egg whites and syrup until they're glossy before you add the butter! By some stroke of luck I had left extra eggs out overnight, but I hadn't softened any extra butter so I had to do it in the microwave and pray that the thinner butter would work. So I tried again. I boiled more syrup. I whipped more egg whites. And I whipped and whipped and whipped until I was afraid my mixer would overheat. And just when I had resigned myself to the idea that I would have to run to Albertson's and buy canned frosting so I could at least serve the damn cake... it came together. It was light and fluffy and glossy, just like it was supposed to be.
And it was totally worth it. :)
So if you've got a tropical party coming up soon or any occasion that needs a spectacular cake that tastes like the beach, give this cake a try. It might be take a little extra work, but trust me... it won't disappoint.
Pina Colada Cake
from Sky High Cakes
Ingredients
For the Brown Sugar Cake
3 3/4 cups cake flour
1 3/4 teaspoons baking soda
1 teaspoon baking powder
1/2 teaspoon salt
2 1/4 cups light brown sugar
2 sticks (8 ounces) unsalted butter, at room temperature
1 3/4 cups buttermilk
5 eggs
2 teaspoons vanilla extract
For the Pina Colada Filling
1 can (20 ounces) crushed pineapple in juice (no sugar added)
1 cup sugar
1/4 cup lime juice
2 teaspoons vanilla extract
For the Coconut Buttercream
3 egg whites
1 cup sugar
1/4 cup water
2 1/2 sticks (10 ounces) unsalted butter, at room temperature
2/3 cup unsweetened coconut milk
1 1/2 teaspoons coconut extract
Other Ingredients
2/3 cup rum (light, amber, dark, whichever you prefer)
toasted coconut flakes for garnish
Directions
For the Brown Sugar Cake
1. Preheat the oven to 300 degrees F. Butter and flour the bottoms and sides of three 9-inch round cake pans. Line the bottom of each pan with a round of parchment or wax paper.
2. Sift together the flour, baking soda, baking powder, and salt into a large mixing bowl; whisk gently to combine. Add the brown sugar, butter, and 1 1/2 cups of buttermilk to the dry ingredients. With the mixer on low, blend to incorporate. Raise the speed to medium and beat until light and fluffy, 2 to 3 minutes.
3. Whisk the eggs with the remaining 1/4 cup buttermilk and the vanilla and add the batter in 3 additions, scraping down the sides of the bowl well and beating only long enough to incorporate between additions. Divide the batter among the prepared cake pans.
4. Bake for 30 to 40 minutes or until a wooden toothpick inserted in the center comes out clean. Let the layers cool in the pans for 10 minutes; then turn out into wire racks, carefully peel off the paper liners, and allwo to cool completely before filling frosting.
For the Pina Colada Filling
1. Combine the crushed pineapple, sugar, lime juice, and vanilla in a large nonreactive skillet. Warm over medium-low heat, stirring to dissolve the sugar, 2 to 3 minutes.
2. Raise the heat to medium and simmer, stirring occasionally to prevent scorching until the juices have almost completely evaporated and the pineapple has a jam-like consistency. This will take several minutes to an hour. Remove from heat and allow to cool completely before using. This can be made a day ahead and refrigerated, but allow to return to room temperature before using.
For the Coconut Buttercream
1. Put the egg whites in the bowl of an electric mixer fitted with the whip attachment so they're all ready to go.
2. Combine the sugar and water in a small heavy saucepan and place over medium heat, stirring to dissolve the sugar. Bring to a boil and cook, without stirring, until the syrup reaches the soft-ball stage, 238 degrees F, on a candy thermometer.
3. Beat the egg whites briefly at medium speed. Slowly add the hot syrup in a thin stream, being careful to avoid the beaters. Continue to whip until the bottom of the bowl is cool to the touch and the eggs have doubled in size and have a glossy appearance.
4. With the mixer on low speed, gradually add the butter, several tablespoons at a time, and continue to beat until a smooth fluffy frosting forms.
5. Add the coconut milk in several additions, scraping down the sides of the bowl well after each addition. Add the coconut extract and mix until smooth.
Putting it Together
1. To assemble the cake, place on layer, flat side up, on a cake stand, cardboard cake round, or a large serving plate. Sprinkle a generous 3 tablespoons over rum over the cake. Spread half of the pineapple filling over the layer, leaving 1/4 inch margin around the edge. Add the second layer, sprinkle with more rum, and cover with the remaining filling. Top with the third layer, flat side up, and sprinkle with the remaining rum. Frost the top and sides of the cake with the coconut buttercream. Press the toasted coconut into the sides of the cake with your hands.
Posted by Jessica Johns at 9:00 AM