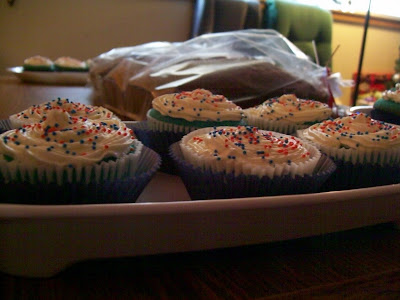 While Boise may be the home of Bronco Nation, most of BSU's hardcore fans are in Las Vegas tonight. Boise State's football team has had a crazy season this year... undefeated and looking toward the Rose Bowl (if not the National Championship) until that fateful game in Nevada in late November. Once ranked happily at #4 in the BCS standings, my beloved Broncos found themselves ranked #10 and playing #19 Utah in the Maaco Las Vegas Bowl this evening... an appreciated and well-played game, but a bitter disappointment in comparison to the golden dream that was once on the horizon.

Prestigious or not, we're still proud of our Broncos and of a well-fought win in the Las Vegas Bowl. We do live in the home of the "Smurf turf," afterall. Dane and I invited some people over for the big game... we ordered a giant sandwich from Subway, bought a few bags of chips and some cheap soda and beer... and I decided to make blue cupcakes in honor of our beloved team. :) 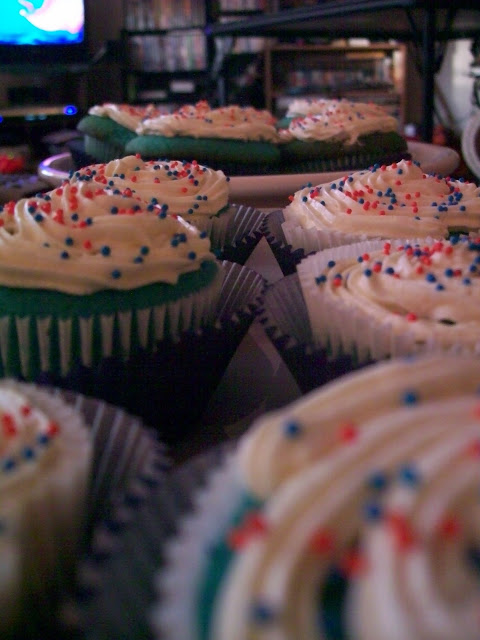 As you can see, the cupcakes came out more green than the true blue I was hoping for. But I put them in blue baking cups, topped with white frosting, and sprinkled some blue and orange nonpareils, and no one cared. They were tasty, and the sentiment was appreciated... and none were left by the end of the night, so I'd say they were a success. 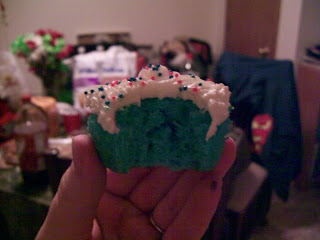 For the cake, I chose to use a white cake recipe, thinking that it would be a better base for dyeing than something like, say, red velvet cake (which I considered using, substituting blue for the red food coloring). Whether it was the cake recipe, the type of food coloring I used, or the amount, my cupcakes turned out a weird teal color, so if I do these again I'll have to do some experimenting to figure out how to get a better blue. I had fully intended from the beginning to use blue and orange sprinkles, so I went with a good white frosting as a base... for which I chose a creamy frosting recipe.
Click to read more. :)
White (Blue) Cake
(taken from my Better Homes and Gardens cookbook)
Ingredients
4 egg whites
2 cups + 4 tbsp cake flour
1 teaspoon baking powder
1/2 teaspoon baking soda
1/2 teaspoon salt
1/2 cup butter or shortening, softened
1 3/4 cups sugar
1 teaspoon vanilla
1 1/3 cups buttermilk
0.3-2 oz blue food coloring
Directions
1. Allow egg whites to stand at room temperature for 30 minutes. Meanwhile, grease and lightly flour or line whichever baking vessels you plan to use. For cupcakes, I found that this batter will make 36 total. My cookbook gives instructions for two 9 x 1/2 inch pans.
2. In a medium bowl, combine flour, baking powder, baking soda, and salt; set aside.
3. Preheat oven to 350. In a large mixing bowl,  beat butter with an electric mixer on medium to high speed for 30 seconds. Add sugar and vanilla; beat until well combined. Add egg whites one at a time, beating well after each addition. Alternately add flour mixture and buttermilk to butter mixture, beating on low speed after each addition just until combined. Add food coloring and mix well.
Note: After looking at a recipe for red velvet cake, I attempted to find 2 oz of liquid food coloring, which is what the red velvet recipe called for. However, I was only able to find 0.3 oz bottles at the places I looked... with more time I may look a little harder next time. Also, has anyone ever used gel icing dye? I found lots of that, but wasn't sure it would work for my cake batter.
4. Using a small cookie scoop, place one scoop of batter in each section of your cupcake pan. I used 2 for my first batch and found that they rose too much and formed little mushroom-like heads, so I recommend sticking with 1. Bake for 20-25 minutes, until a wooden toothpick inserted in the center comes out clean. Cool the cupcakes in the pan for 20 minutes, then remove and thoroughly cool on wire racks. Frost with desired frosting.
Creamy White Frosting
(also taken from my Better Homes & Gardens cookbook)
Ingredients
1 cup shortening
1 1/2 teaspoons vanilla
1/2 teaspoon almond extract
1 pound powdered sugar (about 3-4 cups)
3-4 tablespoons milk
Directions
1. In a large mixing bowl, beat shortening, vanilla, and almond extract with an electric mixer on medium speed for 30 seconds. Slowly add about half of the powdered sugar, beating well.
2. Add 2 tablespoons of the milk. Gradually beat in the remaining powdered sugar and enough remaining milk to reach spreading consistency.
Note: My cookbook states that this will frost the tops and sides of 2 8 or 9 inch cake layers. I made  a full batch (this being my first time) and found that I had way too much left over from frosting 24 cupcakes. The book states that it will freeze for up to 3 months.
Posted by Jessica Johns at 11:25 PM